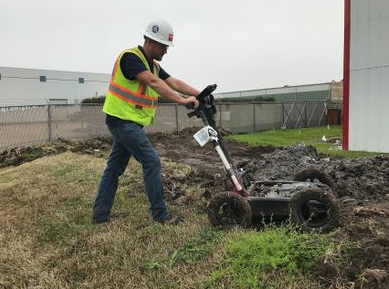 With older manufacturing facilities, the records regarding underground Storage Tanks are frequently lacking. It can be unclear whether a UST was removed, abandoned in place, or if it was ever installed as intended. Because of the current tighter environmental regulations, renovations or real estate transactions can be delayed until any UST’s at the site can be located or shown to have been removed. Testing Services Corporation needed to locate Underground Storage Tanks at two sites in West Chicago, IL. Ground Penetrating Radar Systems was able to scan these two sites in the same day and provide immediate results. At one site, there was clear evidence that a UST had been removed. At the other, it had been unclear whether a UST had ever been installed, and GPRS was not able to find any evidence that an Underground Storage Tank was present. By using the UST locating service of GPRS, the client gained the information they needed to proceed with their plans.

Ground Penetrating Radar Systems analyst Nathan Machel performs a search for Underground Storage Tanks. The GPR system can detect the presence of a UST, as well as any associated piping or other underground utilities.